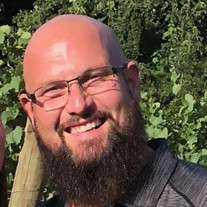 Alan David Griffin, 48, of Indian Head, MD died unexpectedly on April 16, 2021 at UM Laurel Medical Center. Alan’s loss was abrupt and the family is shocked and deeply saddened. Born on September 18, 1972 in Portsmouth, Virginia, he was the son to Alan and the late Sandra Griffin. He was a graduate of Lackey High School. Alan had a variety of jobs over the years, displaying his ability to adapt and quickly learn new trade skills. His work experience included time as a dock loader at Walmart, an auto mechanic at Nissan, a tool salesman for Mac Tools, and a uniform delivery driver. Most recently, he worked as a HVAC Mechanic, at DynCorp International LLC in Fort Washington, MD. Anyone who knew Alan knew that he was a smart, kind hearted, caring, and loving man. He had strong Christian values and absolutely adored his family and numerous friends. He had an immense passion for motorcycles, cars, and adventures with family and friends. He was always a source of positivity and laughter. Alan played football in high school, was an avid sports fan, and a youth football coach. “Coach Al” was a selfless, dedicated, and enthusiastic coach who had a strong passion for the game and the kids he coached. He was a great mentor to the kids and was incredibly supportive of their improvement on the field and off. He was always willing to lend a hand to any kids in need, going out of his way to give rides or buy meals for anyone. Alan’s family and friends will miss him more than words can say. He is survived by his wife of 23 years, Regina M. (Raby) Griffin; sons Hershey A. Griffin and Owen C. Griffin; sisters Jennifer Griffin and Lisa (Griffin) Raupers; brother-in-law Duane Raupers; inlaws Daniel and Carol Raby, brother-in-laws Daniel (Danny Boy) Raby and Adam Raby, sister-in-law Michelle Raby; aunt Shelia Scott, cousin David Scott and wife Katherine Scott. He is also survived by nephews; Zachary, Nathan, Griffin Sunstedt, Wyatt Raupers, Tristan, Jaiden, and James Raby and nieces Everly Raupers and Mabel Raby. He was preceded in death by his daughters, Rachael L. M. Griffin and Bryce D. Griffin. There will be a memorial service held at New Life Church (Dome church) on Tuesday, April 27, 2021 at 1:00 pm at the La Plata campus. Per COVID-19 guidelines, masks are required and social distancing is still in place. Please consider attending the virtual service. Link will be posted on Monday.

Alan David Griffin, 48, of Indian Head, MD died unexpectedly on April 16, 2021 at UM Laurel Medical Center. Alan&#8217;s loss was abrupt and the family is shocked and deeply saddened. Born on September 18, 1972 in Portsmouth, Virginia, he was... View Obituary & Service Information

The family of Mr. Alan David Griffin created this Life Tributes page to make it easy to share your memories.

Send flowers to the Griffin family.