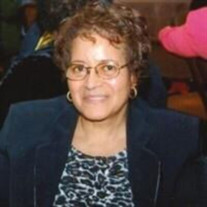 Barbara Jean Tyler (Age 81) of Upper Marlboro, Maryland Barbara Jean Tyler, the daughter of the late Benjamin Harrison Walton and Roberta L. Carroll Walton, was born April 20, 1939 in Pomonkey, Maryland. She departed this life on March 10, 2021. Barbara received her education in the Charles County, Maryland school system, graduating with honors in 1957 from Pomonkey High School. She grew up attending Metropolitan United Methodist Church. Later, she met and married Paul E. Garrett of Marietta, Georgia, and gave birth to her only child, Melody A. Garrett. Barbara divorced and years later, briefly married Linwood Tyler of Lynchburg, Virginia. Barbara relocated to Landover, Maryland and became an active member of Highland Park Baptist Church. She entered her Civil Service career as a Christmas gift wrapper at the local Base Exchange. She began her career in the Federal Government working for The Department of Health, Education, and Welfare and retired from there after nearly 30 years of service. While working, she attended college and earned a B.A. in Accounting from the University of the District of Columbia (UDC) in 1982. Barbara began her second career working for Lockheed Martin on a HUD contract for an additional 20 years. She enjoyed her work and colleagues so much that she traveled her lengthy, tedious commute to Rockville daily until her second retirement in 2008. Meanwhile, before complete retirement, Barbara worked as the Office Manager for Potomac Anesthesia Associates, PC for her daughter, and as Co-owner and Operator of Walton’s Seafood Carry-Out 2000 - 2009. This was Barbara’s final retirement, but she was not done. She became extremely active in her neighborhood homeowners’ association and was instrumental in developing her neighborhood Homeland Security Community Emergency Response Team (CERT) where she became a certified team member and also headed the task force for emergency pet management until 2019. Anyone who knew Barbara knows that she had a passion for animals and animal rescue services. She was also actively involved each year with the Associations’ National Night Out Program. Barbara’s other passions included traveling, cooking, eating, and baking her famous Walton’s sweet potato pies. She could also throw down a mean carrot cake. She loved to cruise and has cruised every Caribbean route. Other travels include West Africa, South Africa, Nassau (her real love), Turks and Caicos, Curacao, Dominican Republic, St. Lucia, Mexico, Hawaii, and Alaska. She collected tee shirts and turtles from everywhere. You could say that she never met a T shirt that she did not like. Her biggest passion of all was her family. The Walton and Carroll families gave her love and a solid foundation. She was most proud of her daughter, grandchildren, and great grandchildren. She could be described as compassionate, very independent, and well thought out. She loved adventure, challenges, and the sweet smell of success. She loved to hear of anyone’s success story. She simply loved victories! Barbara was a member of the Pomonkey High School Alumni Association, Pomonkey High School Class of 1957 Lunch Group, National Association of Black Scuba Divers (NABS), and former member of both the Coalition of 100 Black Women, and the Order of the Eastern Stars. For many years, she served as Treasurer for Maryland State Senator Nathaniel Exum. She is survived by her daughter Melody A. Garrett, MD, son-in-law Woodrow W. Watkins, Jr., 4 siblings: Vera W. Merritt, Rodney A. Walton (Kimberly), R. Carroll Walton, and Kline I. Walton; 2 grandsons: Travis and Nicklaus Watkins; 5 grandchildren: Antonio and Javier Bonn, Juliette Watkins, Adeara Watkins, and Travis Watkins, Jr.; a host of cousins, nieces, nephews, and eternal friends. Preceded in death were 2 brothers Bennett H. Walton and Vernon C. Walton: one sister, Shirley A. Walton; and brother-in-law, Eugene M. Johnson. Gone but never forgotten!!!! Viewing: 10am until time of Service: 11:00am Thursday, March 18th in the Chapel of Thornton Funeral Home, P.A., Indian Head, Maryland 20640. Interment Trinity Memorial Gardens, Waldorf, Maryland. On Thursday, March 18th at 11:00 am, please click on the link below to live stream the service. Please make sure when viewing the services that the volume located in the right lower corner (where it says "live") on the viewing screen is turned up (the bars should be blue). The streaming will begin after the final family viewing. Therefore, there may be a delay before the service appears on the screen. Thank you.

The family of Barbara Jean Tyler created this Life Tributes page to make it easy to share your memories.

Send flowers to the Tyler family.