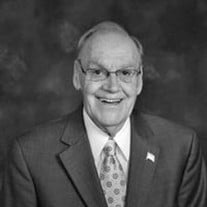 Carl Luther Knauer, 88, of Charlottesville, Va., went home to be with the Lord on Friday, May 10, 2019. He was raised in McAdoo, Pa., and was the youngest of six children born to Frederick and Dorothy Bender Knauer. He served his country during the Korean War as a speed radio operator. In 1954, he married the love of his life, Ruth Jones. He and his beloved, “Ruthie” moved to Long Island, N.Y., where they raised two daughters. During that time, Carl worked as a meat cutter at A&P supermarkets. After retirement they moved to La Plata, Md. then to Charlottesville, Va. Throughout his life, he was active in his local church serving as an insightful teacher; dedicated deacon and gifted vocalist. He established and faithfully served in the “Tuesday Church” ministry at Grace Health and Rehab in Greene County. As grandchildren arrived, Carl became “Pop” and the name would follow him for the rest of his years. Pop was an avid puzzler and earned his “black belt” in Sudoku time and time again. Those who knew him well, described him as one of the most genuinely loving people they had ever met. His welcoming handshakes and hugs will be missed by many. Carl Knauer has now joined his wife, Ruth Jones Knauer; daughter, Deborah Polycranos and granddaughter, Lauren Rene Polycranos in the presence of the Lord. He will be greatly missed by his daughter, Catharine Alfano and her husband, Alan Alfano; grandchildren, Jordan Polycranos, Jonathan Polycranos, Sarah Alfano Imbert and husband Ronald Imbert, David Alfano and wife, Michelle Alfano, and Anna Deborah Alfano, as well as, great grandchildren Domenick Alfano and Lucas Imbert. The family welcomes friends at Hill and Wood Funeral Home, 201 North First St., Charlottesville, Va. on Monday, May 13, 2019 from 5 to 7 p.m. and at 10 a.m. at Chestnut Grove Baptist Church, 550 Buck Mountain Road, Earlysville, Va. on Tuesday, May 14, 2019 followed by a funeral service at 11 a.m. A graveside service will be held at Trinity Memorial Gardens, Waldorf, Md. at 1 p.m. Wednesday, May 15, 2019. Memorial gifts may be made to Chestnut Grove Baptist Church, 550 Buck Mountain Rd., Earlysville, VA 22936 or Hospice of the Piedmont at www.hopva.org.

Carl Luther Knauer, 88, of Charlottesville, Va., went home to be with the Lord on Friday, May 10, 2019. He was raised in McAdoo, Pa., and was the youngest of six children born to Frederick and Dorothy Bender Knauer. He served his country during... View Obituary & Service Information

The family of Carl Luther Knauer created this Life Tributes page to make it easy to share your memories.

Send flowers to the Knauer family.