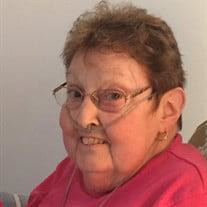 Carol L. Ondrejko, 76, died early morning on Friday, June 18, 2021 at Georgetown University Hospital after suffering a hemorrhagic stroke following a long battle with Rheumatoid Arthritis. She was born January 22, 1945 in Powhatan Point, Ohio, the daughter of Fred and Minnie Van Dyne. She graduated from high school in 1963 and left for Washington, DC soon after. There she met her husband John G. Ondrejko, Jr. and they were married on April 4, 1964. She worked as a medical office manager for over 30 years before retiring several years ago. She enjoyed cake decorating, ceramics, word search, coloring on her iPad, and most of all her grandchildren and other family. She is survived by her children Michael (Tracy) Ondrejko of Defiance, Ohio and Michelle Ondrejko of Clinton, Maryland; grandchildren Matthew Wachtman, Aleksander Ondrejko, Alena Ondrejko, and Aleksandria Wachtman; siblings Larry (Sarah) Van Dyne, Charlotte Virgili-Smith, Homer (Betty) Van Dyne, Harold Van Dyne, Barbara (Charles) Smith, and Alan Van Dyne; many nieces and nephews and great-nieces and nephews. She is preceded in death by her parents; her husband; her brother Fred Van Dyne, Jr. and sister Juanita Graham; and her daughter in-law Denise Arehart. To send flowers or a memorial gift to the family of Carol Louise Ondrejko please visit our Sympathy Store.

The family of Mrs. Carol Louise Ondrejko created this Life Tributes page to make it easy to share your memories.

Send flowers to the Ondrejko family.