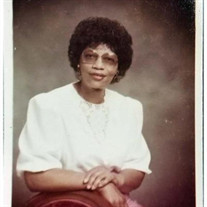 Carrie Bell Elam, daughter of the late Willie Friend and Gracie Jones Friend, was born on October 19, 1932 in Charlotte County, Virginia. Eight siblings preceded her in death as well as her beloved daughter Arvonzey Dale Elam and her husband Clarence Sidney Elam. Carrie transitioned into God's hands peacefully at home on Sunday, January 16, 2022. Carrie grew up in Charlotte County, Va and attended public schools with her siblings and church with her family. She met Clarence Sidney Elam and they fell in love and were married. From this union they were blessed with three children. Carrie was a dedicated wife, mother and homemaker. Eventually Carrie moved to Washington, DC with her three children to start her long career in Hospitality with some of the finest hotels in the Washington metropolitan area. She also was blessed with two more daughters. Carrie loved to have family gatherings, taking care of her grandchildren and great-grandchildren. She had a green thumb and would grow some of the most beautiful plants she would freely give them away to anyone who wanted one, even if it was her favorite plant. She also loved to bake sweet potato pies, especially on the holidays, and would always send you home with a pie or two! Carrie also loved to play cards and would host games for her family and friends. She loved to socialize with everyone and was a very fun person to be around. Carrie moved to Prince George's County with her oldest daughter where she started her new wonderful life until she transitioned to be with her Heavenly Father. Carrie leaves to cherish her precious memory her four children, Shirley Diane Elam, Sidney Vernos Elam, Sr. (Thea), Tine Annette Roberts and Deborah Jean Roberts; Seven grandchildren, Shanetta Y. Tunnell (Kevin, Sr.), Chereka V. Elam, Sidney Vernos Elam Jr., Eddie B. Roberts, Damonta B. Roberts, Sharday N. Roberts, and Damaco R. Roberts; Thirteen great-grandchildren and a host of other relatives and friends. Viewing, 10:00 a.m. until time of Service, 11:00 a.m., Monday, January 31, 2022 in the Chapel of Thornton Funeral Home, P.A., 3439 Livingston Road, Indian Head, Maryland 20640. Interment, Trinity Memorial Gardens, 3221 Mattawoman Beantown Road, Waldorf, Maryland 20601.

Carrie Bell Elam, daughter of the late Willie Friend and Gracie Jones Friend, was born on October 19, 1932 in Charlotte County, Virginia. Eight siblings preceded her in death as well as her beloved daughter Arvonzey Dale Elam and her husband... View Obituary & Service Information

The family of Carrie Bell Elam created this Life Tributes page to make it easy to share your memories.

Send flowers to the Elam family.