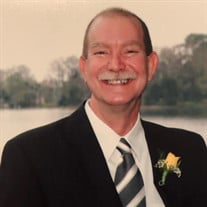 Charles is predeceased by parents: Charles Stone, Sr. and Margaret Lena Stone. He is survived by many family and friends, including: His daughter, Sara Stone Agor and husband Greg. His son, Charles Stone III and wife Tabitha. His grandchildren: Hannah Agor, Hailey Stone, and Charles Stone IV. His step-daughter, Laura Metz. His sister, Rebecca Clarke. His nieces, Kimberly Campbell and Jessica Hodges. Known by family and friends as Chuck, he was born in Washington DC, on August 30, 1954. He attended drafting school after high-school, then began working at Miscellaneous Metals. While there, he detailed part of the iron gates surrounding the White House. In 1984, he began working at SMECO in the drafting department. He spent 33 years employed at SMECO before retiring as the Work Management & Standards Manager in 2017. After retiring, Chuck moved to Little River, South Carolina. In retirement, Chuck was blessed by the friendship of his cousin, Cathy Carter who lived in the same community. Chuck had many hobbies and interests that kept him busy and content. He enjoyed golfing, music, and keeping up with sports. He was an avid collector of art, stamps, and coins. Chuck's greatest pride and joy were his children and grandchildren. He cherished every moment he had with them. His grandchildren adored him and were always so excited to spend time with their Poppy. He was proud of their accomplishments and enjoyed the friendships he shared with them. Chuck's smile was contagious and his laugh lit up the room. In his work and in his personal life he was strong, dependable, intelligent, creative, and well-respected. To know him was to love him. Chuck greatly loved & missed his parents, looking forward to the day he would be together again with them. We find comfort in knowing they are finally reunited, and watching over us from heaven. All are welcome as we celebrate Chuck's life. The visitation will be held at Huntt Funeral Home, 3035 Old Washington Road, Waldorf, MD 20601, on Thursday (11/4/21), from 5:00pm-7:00pm; and again on Friday (11/5/21), from 12:00pm - 12:30pm. Service will follow the 30 minute visitation at Huntt on Friday, from 12:30-1:00pm. Burial & prayers will follow at Trinity Memorial Gardens & Mausoleum, 3221 Mattawoman Beantown Road, Waldorf, MD 20601, at 1:45pm. Family will be personally invited afterwards to gather for lunch.

Charles is predeceased by parents: Charles Stone, Sr. and Margaret Lena Stone. He is survived by many family and friends, including: His daughter, Sara Stone Agor and husband Greg. His son, Charles Stone III and wife Tabitha. His grandchildren:... View Obituary & Service Information

The family of Charles Benedict Stone Jr. created this Life Tributes page to make it easy to share your memories.

Charles is predeceased by parents: Charles Stone, Sr. and Margaret...

Send flowers to the Stone family.