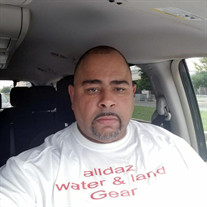 Charles Thomas, Jr. was born on May 16, 1968, in Washington, DC at George Washington University Hospital to Carol and Charles Thomas Sr. Moving several times with his family as a child from West Virginia and Florida, Charles settled in Washington, DC, where he matriculated through the DC Public School system. While in school, Charles participated in football and band. Charles held various jobs through the years. However, he found his passion career and was employed for almost a decade as a concrete truck driver with Superior Concrete. During his tenure, he was a devoted employee, learning almost every job in the company. Most recently, he was also tasked as an Assistant batch man who batched concrete mixes at the Southwest Washington DC plant. He took great pride in working hard. Charles was a dedicated family man and enjoyed spending time with his wife, children, and granddaughter. He also enjoyed football and playing chess. He will be remembered for his remarkable ability with numbers, his infectious laugh, his kind and compassionate heart, his words of wisdom, his incredible storytelling, and his love of the Redskins (the Washington Football Team) and Go-Go music. Charles found great joy in hosting huge cookouts and fight parties, with his ‘spot’ usually holding court right by the grill, where you would often find family, friends, neighbors, and coworkers. A natural born entrepreneur, Charles was finally able to fully capitalize on those skills when he and his wife, Melanese, opened their catering and food truck business, Sol Familia Mobile Kitchen in 2019. In December 2020, Charles contracted COVID-19 and was briefly hospitalized. Unfortunately, the virus took its toll on his body and Charles was called home on February 28, 2021, due to complications related to his bout with COVID-19. Charles was preceded in death by his parents, Charles Thomas, Sr. and Carol Thomas, his grandmother Vernona “Polly” Jones, his aunt Betty Goldson, and his uncle Oden Allen. Charles is survived by his loving and devoted wife of nearly ten years, Melanese Marr-Thomas; his four sons and two daughters (Charles Thomas III; Logan Thomas; Keyon Brown; Serena Marr; Zachary Marr; and Savion Thomas); one granddaughter, Anaya Marie Thomas; his brothers, Michael Thomas and Jermaine Thomas (Leshon); his uncle and aunt, Ronald and Ernestine Allen; his niece Kiara Anderson; and his nephew Malik Debruhl, 2 great nephews, 3 great nieces and in-laws. Charles will forever be remembered fondly by countless cousins; his Chillum Heights family and friends; his Superior Concrete coworkers and the loyal Sol Familia Mobile Kitchen patrons. Friends are invited to share their memories of Charles at the Lee Funeral Home, 6633 Old Alexandria Ferry Road, Clinton, MD 20735 on Tuesday, March 9, 2021, from 10:30am until 12:30pm, during the visitation. Due to COVID restrictions, the homegoing service will be private. Interment will follow the private service at Trinity Memorial Gardens, located at 3221 Mattawoman Beantown Road in Waldorf, MD, beginning at around 2:30pm. A private family repast will take place at the Thomas family home, following the burial.

Charles Thomas, Jr. was born on May 16, 1968, in Washington, DC at George Washington University Hospital to Carol and Charles Thomas Sr. Moving several times with his family as a child from West Virginia and Florida, Charles settled in Washington,... View Obituary & Service Information

The family of Mr. Charles Thomas Jr. created this Life Tributes page to make it easy to share your memories.

Send flowers to the Thomas family.