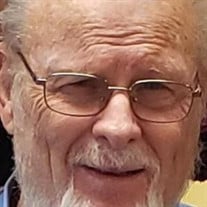 On, Monday, April 26. 2021, Donald E. Richards, Sr... Loving husband, father, grandfather and great grandfather, passed away peacefully at the age of 76. Don was born on June 3, 1944 in Indian Head, Maryland. After graduation from high school, he began his career in the automotive industry, starting as a parts clerk at Wilson Powell Lincoln Mercury. His strong work ethic and ability to sell, quickly gained the attention of Wilson Powell, owner of the dealership. Wilson promoted Don to Parts Manager of the dealership. Don ran an award winning parts department receiving local and national recognition and awards from the Ford Motor Company. Don’s hobbies and passions were NASCAR racing, golf and service projects with the Lion’s Club. He served on NASCAR driver David Pearson’s pit crew when he raced in Charlotte and Daytona. Don’s passion for stock car racing put him behind the wheel of a stock car. Don proudly drove a midnight blue 1966 Ford Mustang Hardtop. The number on his car was 99Jr. Don raced at tracks in Maryland and Virginia. After he finished his racing career, he started playing golf. Don had many friends who shared his passion for racing, golfing, and serving in his community. He was an active member of the Lion’s Club in Indian Head and a loyal friend to so many people throughout his lifetime. Don was preceded in death by his father, Tex, his mother Frances, and his son DJ. He is survived by his wife Nancee, and his daughters Cyndee, Vickie, Dodie, and his daughter-in-law, Samantha. His grandchildren Brendon, Jesse, Tyler, Dylan, Devan, Jordan, Emilee, Olivia, and Jack. His great grandchildren Dane, Letty and Emma. Services will be held on Wednesday, May 5, 2021 at 11:00 am at Trinity Memorial Garden and Mausoleum in Waldorf, MD. In lieu of flowers, make donations in memory of Donald E. Richards, Sr. to Parkinson’s Foundation, 200 E. 1st Street Suite 800, Miami, FL 33131, online donations can be made www.parkinson.org, Tribute to Donald E. Richards, Sr.

The family of Mr. Donald E Richards created this Life Tributes page to make it easy to share your memories.

Send flowers to the Richards family.