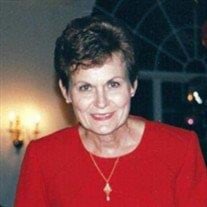 Dorothy Juanita (Nita) Wallace, age 81, of White Plains, MD passed away at her home on November 11, 2020, surrounded by her family. She was born on September 14, 1939 in Blytheville Arkansas, the daughter of the late Charley and Shirley Nelson. In addition to her parents she was preceded in death by a sister, Gladys Peterson and two brothers, Charles and Terry Nelson. Survivors include her husband of 61 years Bobby Wallace, a son Randall Wallace and wife Rhonda of White Plains, two daughters Rebecca Edwards and husband Charles of Port Tobacco, and Kathleen Nuetzel and husband Steven of Towson. Nita and Bob were blessed with eight grandchildren, Ryan Wallace, Rayna Wallace, Emily Edwards, Will Edwards, Grant Edwards, Luke Nuetzel, Kyle Nuetzel and Elianna Nuetzel. Survivors also include a brother Richard Nelson of Claremore, Oklahoma and two sisters Patsy Britt and Peggie Paluso of Blytheville. Nita came to Washington, DC in 1957 after graduating from high school where she was employed by the Federal Bureau of Investigation and later by G an B Insulation in LaPlata. She was a loving mother who took great delight in her children and grandchildren. She loved to cook and was a dedicated homemaker. She was a member of First Baptist Church of Waldorf where she served as Director of the Hospitality Committee delighting all who partook of many church dinners. She enjoyed traveling with her husband. They visited all but one of the continental states, as well as Canada, England and Scotland. Nita loved Myrtle Beach and Disney World where she and Bob enjoyed several vacations with their children and grandchildren. Due to virus safety concerns there will be a private ceremony for the family at First Baptist Church of Waldorf. Memorial contributions may be made Nita’s name to Georgetown Lombardi Comprehensive Cancer Center, 3800 Reservoir Rd. NW, Washington D.C. 20057, Phone: (202) 444-4000.

Dorothy Juanita (Nita) Wallace, age 81, of White Plains, MD passed away at her home on November 11, 2020, surrounded by her family. She was born on September 14, 1939 in Blytheville Arkansas, the daughter of the late Charley and Shirley Nelson.... View Obituary & Service Information

The family of Dorothy Juanita Wallace created this Life Tributes page to make it easy to share your memories.

Send flowers to the Wallace family.