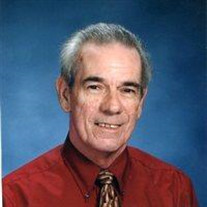 Edward Tuttle passed into Life Eternal on October 17, 2019 surrounded by his loving family. Born in Brooklyn, New York on April 24, 1942 the first child of Rita and Edward A. Tuttle. He was raised in Brooklyn, New York. After high school he went on to graduate from Husson College in Bangor, Maine. Immediately following graduation, he entered the United States Air Force and attended Officer Training School at Lackland Air Force Base, Texas. He spent the next 37 years of his life in the United States Air Force and Air Force Reserves. His first assignment was in Orlando, Florida where he met his “Darling” Laraine in October 1966 and were married on February 11, 1967. They then went to Guam, Youngstown, NY and his last assignment was at Andrews Air Force Base, Clinton, Maryland. Retiring as a Lieutenant Colonel. He then went on to work for Charles County Public Schools as a substitute teacher, EA assistant and attendance clerk at Mattawoman Middle School in Waldorf, Maryland retiring in 2006. Ed or Eddie Boy as he was fondly known as had a love of his history, politics, sports particularly baseball and soccer, church but most of all his family. He never missed a baseball or soccer game or any other celebration with his family. His family was his all-consuming love. Beloved husband of 52 years to his “Princess” Laraine L. (Haskins) Tuttle; devoted Father to his daughters Tiffany Lynn (Ian) of Waldorf, Maryland and Jennifer Laura (Sonny) of Clements, Maryland; dear brother of Cassie Tuttle of Port Chester, New York; loving Grandpa/Pop Pop to Evan Hunter, Collin Douglas, Elaina Ann, Emily Lynne, Eric Anthony and Elyssa Lauren. His never-ending faith, love and strength were a touchstone to his family. May you rest peacefully in God’s grace knowing that you were and always will be our hero and how very much you were loved. Soar high Daddy, we know you will be with us always. Love and miss you more then words could ever say. A Celebration of Life will be held on Wednesday October 23, 2019 at Brinsfield Funeral Home & Crematory, P.A., 30195 Three Notch Road, Charlotte Hall, MD 20622 from 5:00 to 8:00 p.m. with prayers at 6:45 p.m. A mass of Christian burial will take place on Thursday at St. Mary’s Bryantown Catholic Church, at 10:00am, interment to follow at Trinity Memorial Gardens. Condolences to the family may be made at www.brinsfieldfuneral.com

Edward Tuttle passed into Life Eternal on October 17, 2019 surrounded by his loving family. Born in Brooklyn, New York on April 24, 1942 the first child of Rita and Edward A. Tuttle. He was raised in Brooklyn, New York. After high school he... View Obituary & Service Information

The family of Edward "Ed" Tuttle created this Life Tributes page to make it easy to share your memories.

Send flowers to the Tuttle family.