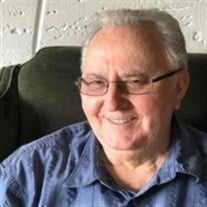 On Sunday, September 19, 2021, Edwin Lee Patterson Sr., loving husband and father of two sons, passed away at age 82. Edwin was born on January 15, 1939, in Bellaire, Ohio. He spent six years in the United States Air Force, as an MP, followed by twenty-one years as a Police Officer in Washington DC, MPD. Following his retirement from the police force, he continued to work in the field of security for various organizations. On January 14, 1966, he married Theresa Catherine Awad. They raised two sons, William Lopez and Edwin Patterson Jr. (Eddie), and leaves behind three granddaughters, Kristen Patterson, Megan Vissari and Emily Patton. He had a passion for boating, the Cleveland Browns football team, music by Johnny Mathis and Italian food. A strong work ethic from an early age, he worked until he was seventy-seven. Edwin was a man who loved to keep secrets when it involved surprises of gifts and money to those he loved. In his youth and throughout high school Edwin was a big-time track and field star winning numerous regional meets. Many years later and after the death of his beloved wife Theresa, he reconnected with his childhood sweetheart, Carol Strama. Edwin was a faithful and devout Catholic and proudly wore his gold cross, a gift from Carol. He is survived by his sons William and Eddie and their adult children, several nieces and a nephew. A funeral service will be held on October 15, 2021 at 11:00 a.m. at the Trinity Memorial Gardens and Mausoleum, 3221 Mattawmon, Beantown Road, Waldorf, Maryland 20601. In lieu of flowers, please make a donation to the American Cancer Society. To send flowers or a memorial gift to the family of Edwin Lee Patterson Sr please visit our Sympathy Store

The family of Edwin Lee Patterson Sr created this Life Tributes page to make it easy to share your memories.

Send flowers to the Patterson family.