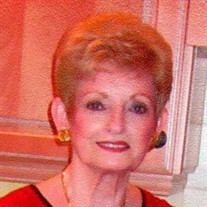 On January 17th, 2021, Frances Brubacher Schultz entered the good graces of heaven. She passed quietly at her home in the company of her loving husband, William Schultz. Fran was born on June 2, 1942 to Oswald and Pauline Brubacher of Leonardtown, Maryland to become the youngest of three Brubacher children; the others being Marlene and Robert. Fran graduated from Leonardtown School in Leonardtown, Maryland in 1960 and later entered St. Mary's Seminary College at Maryland an earned an associate degree in business in 1962. Her first employer was the Grumman Aircraft Corp. In 1962 she was hired into the companies Field Service Office at the Navy Air Test Center, Patuxent, Maryland where she held the positions of both secretary and administrator to the entire Grumman staff and all the visiting Grumman personnel conducting or supporting various test programs. During these early years her personal pleasures included taking flying lessons, bowling, travel, dancing and being part of the social scene. It was there, at Patuxent River, where she met and fell in love with a fellow employee, Bill Schultz, a Field Service Representative of Grumman that had just returned from Japan in 1971. They were married on December 9, 1973 and from there Fran made many moves in the company of her husband from job to job; New York, Canada, California Japan, Malaysia, Australia. Because of her grace and charm, when she moved to California in 1975 she was immediately hired into the Sales Department by the management of the Versailles Apartments; her place of residence at that time. That was the only job she ever held outside of all those years with Grumman. All during these various travels and assignments she found ways to remained employed with Grumman where ever practical so that when she retired in 1999 she had 34 years of employment with the company. Her personnel file was filled with endless accolades about her fine work and professional manner. She always claimed that the last six years, with Grumman, 1993 to 1999, were the most enjoyable. As an International Program Administrator she spent time working with the officers from Egypt, France, Taiwan and Australia during their procurement of the Grumman E2 Hawkeye aircraft. She especially enjoyed seeing to their many family needs such as schooling, medical issues, finding suitable residence and subsequently becoming part of their family social circle. In 1999, after she retired, she moved to Williamsburg, Virginia. It was that usual grace and charm that allowed her to became fast friends of neighbors and many others in the general Williamsburg area. To know her was to love her. Fran enjoyed finally being settled down where she could devote serious time to her home and especially her garden. Interspersed in those years she delighted in travel. There were many vacations trips she took; primarily to Hawaii along with other trips to England, Alaska, Japan, Malaysia and New Zealand. Later in life cruising became very popular with her. Fran is survived by her loving husband William and her sister Marlene Sykes of Urbana, Missouri. Her parents, Oswald and Pauline Brubacher, and her brother Robert have preceded her in death. There will not be a memorial service given the current social distancing. When the social constraints are removed we will have a Celebration of Life for Fran. In the meantime she will be cremated and interred at the Memorial Gardens Cemetery in Waldorf, Maryland next to her father, mother and brother. Anyone who wishes to make a contribution in her name please do so to either the National Cancer Center or Arthritis Foundations.

On January 17th, 2021, Frances Brubacher Schultz entered the good graces of heaven. She passed quietly at her home in the company of her loving husband, William Schultz. Fran was born on June 2, 1942 to Oswald and Pauline Brubacher of Leonardtown,... View Obituary & Service Information

The family of Mrs. Frances B Schultz created this Life Tributes page to make it easy to share your memories.

Send flowers to the Schultz family.