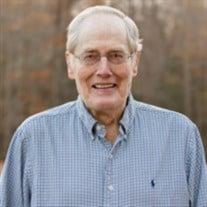 George Lemuel Lee Hancock passed away peacefully at home on September 27, 2021. Born in his grandparents’ house in Bryantown on July 16, 1930, he was the son of the late James I. Hancock and the late Mabel L. Hancock of White Plains. George attended St. Mary’s Bryantown, Archbishop Neale and La Plata High School. He served 10 years in the National Guard, being only the 10th person to sign up in 1946. He soon began his 30-year insurance career with Peoples Life. Later, he owned Hamilton Brothers, Waldorf Texaco and The Carousel. In earlier years, he enjoyed attending horse races, trap shooting, fishing, hunting, cooking crabs, and was known as one of the best pool players around. He was a simple man who loved his family and friends. “Pop-Pop” spent a lot of time with his grandchildren. He also enjoyed cooking for the family and loved playing cards. He attended Marbury Baptist Church for the last several years. He will be most remembered for his robust laughter and enthusiasm for life. In addition to his parents, George was preceded in death by his wife of 45 years, Marilyn Cox Hancock and his brother, James Hancock, Jr. He is survived by his three daughters, Kimberly Girsch, Lisa Case (husband David) and Shannan Hammonds; seven grandchildren, Douglas Girsch, Dana Bartholomew, Dustin Girsch, Alyssa Case, Allston Case, Jessica Hammonds and Jordan Hammonds; 10 great grandchildren; and one sister, Peggy Hill Sipes. He is also survived by several close cousins, as well as one special life-long friend, Vic Estep. Visitation will be held Monday, October 4, 2021 from 6-8pm at Raymond Funeral Home, 5635 Washington Avenue, La Plata, MD. A second visitation will be held Tuesday October 5, 2021 at 9:00am at Marbury Baptist Church, 4670 Bicknell Road, Marbury, MD 20658 followed by a 10:00am Funeral Service. Interment will follow at Trinity Memorial Gardens, 3221 Mattawoman-Beantown Road, Waldorf, MD 20601. Pastor Tim Bean will officiate. In lieu of flowers, donations may be made to The American Heart Association, 4217 Park Place Court, American Heart Association Building, Glen Allen, VA 23060. To send flowers or a memorial gift to the family of George Lemuel Lee Hancock please visit our Sympathy Store. Today's

George Lemuel Lee Hancock passed away peacefully at home on September 27, 2021. Born in his grandparents&#8217; house in Bryantown on July 16, 1930, he was the son of the late James I. Hancock and the late Mabel L. Hancock of White Plains. George... View Obituary & Service Information

The family of George Lemuel Lee Hancock created this Life Tributes page to make it easy to share your memories.

Send flowers to the Hancock family.