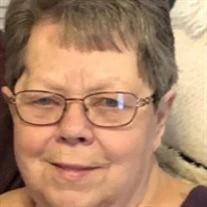 She was born on February 15, 1944 in Leonardtown, Maryland to the late Edward and Eleanor Strobel. She was a lifelong resident of Charles County and was crowned Miss Fire Prevention in 1961. Gloria was always a hard worker from her first job in Washington, DC as a secretary in the FBI to 30 years with Safeway until her retirement in 1995. But her lifelong passion was being a wife, mom, sister, grandmother, great grandmother and friend. Gloria loved Maryland blue crabs, baking, cooking and everything that would bring the whole family together. She enjoyed watching Judge Judy, Family Feud, and her all-time favorite soap opera, The Young and the Restless. Gloria was a huge fan of QVC and all things for the kids that blinked, buzzed, squeaked and made lots of noise for the kids to enjoy. She was a member of Calvary Gospel Church in Waldorf, Maryland and especially enjoyed her weekly bible study classes. Gloria is a former member of the Red Hat Society and the Old Waldorf School. She was married to the late Harry “Ronnie” Moody for 33 wonderful years. In addition to her parents, husband and stepmother, Mary Strobel, Gloria is preceded in death by her sisters, Margaret Rollins and Barbara Gray; brothers, Joseph, Glen, Phillip and Mark Strobel; step-brother, Courtney Good; grandson, Zachary Campbell; and great grandson, Luca DeLaGarza. Gloria is survived by her son, Arthur A Viering, Jr. and his wife Cynthia of Port Tobacco, Maryland and their children, Megan, Jeffrey, Brooke and Keith; daughter, Beverly R. Campbell and her husband Richard of Waldorf, Maryland and their sons, Ryan and Bailee; stepdaughter, Stephanie J. Doumecq and her son Michael of Garland, Texas; great grandchildren, Noelle, Alexi, Evan and Jackson; sisters, Rose Marie Goldsmith, Ruth Romestan and Mary Helen Moody; brother, Steven Strobel; step-brothers, Willie Good, Raymond Good, Richard Good and Ralph Good.

She was born on February 15, 1944 in Leonardtown, Maryland to the late Edward and Eleanor Strobel. She was a lifelong resident of Charles County and was crowned Miss Fire Prevention in 1961. Gloria was always a hard worker from her first job... View Obituary & Service Information

Send flowers to the Moody family.