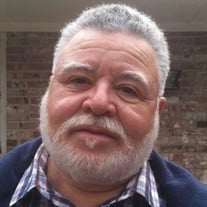 On Monday, March 29, 2021, James Ernest “Dickie” Adams Jr, 74, from Indian Head, MD made his transition from earth to his heavenly home. James, affectionately known as “Dickie” was born on August 17, 1946 in LaPlata, Maryland to the late James “Hardin” and Catherine “Lynn” Adams. Dickie grew up and was educated in Charles County Maryland. He graduated from Pomonkey High School with the class of 1965. He was no stranger to hard work. He enjoyed working with the Potomac Electric Power Company (Pepco) for thirty + years where he retired after years of dedicated services, but he never retired his kindness, willingness, and desire to help others. He lived life to the fullest and with great dignity. Dickie was extremely passionate about his race cars and going to the racetrack. If he wasn’t at the racetrack, he would be watching the races on TV. He also, enjoyed cheering on his favorite football team, the Washington Football Team formally named, Washington Redskins. Our beloved “Dickie” leaves to cherish his precious memory to his beloved wife, his longtime friend and love of over 55 years, Helen; Together they raised a family of three children: Denise “NeeCee”, Paul (Tijuana), and Clarence “Mikey”; Four Grandchildren: Anthony, Miesha, Jalen and Kaitlyn; Two sisters: Catherine “Romaine” Adams and Mary Adams; Four brothers: Warren Adams, Joseph “Red” (Wanda) Adams, John “JC” Adams and David “Tom” Adams; and a host of nieces, nephews, other relatives, and friends. Visitation will be held on Tuesday April 13, 2021 at Sacred Heart Catholic Church 201 St Mary's Ave, La Plata, MD 20646 from 8:30 a.m. until 9:45 a.m. with Mass of Christian Burial at 10:00 a.m. Interment Trinity Memorial Gardens Waldorf, Maryland.

The family of Mr. James Ernest Admas Jr. created this Life Tributes page to make it easy to share your memories.

Send flowers to the Admas family.