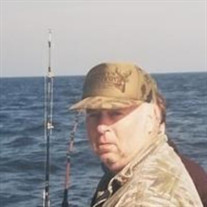 Joseph William Buckler, Sr. of Mechanicsville, MD passed away unexpectedly at his home on May 7, 2020. Joe was born on December 20, 1949 in LaPlata MD, to the late Earl Thomas Buckler and the late June Lorraine Keech Buckler. He was raised on their farm in Aquasco, MD. In 1968, Joe graduated from Gwynn Park High School where he was a member of the FFA. The following year, he joined the DC Air National Guard. He was stationed at Andrews Airforce Base, where he served honorably as an aircraft mechanic with the 113 Squadron until 1975. In 1970, Joe began working for Pepco at Chalk Point as a mechanic. He remained with the company for 43 years, until his retirement in 2013. Joe was a member of the I.B.E.W Local 1900 and the Thomas J. Shyrock Masonic Lodge in Hollywood, MD. Joe, affectionately known to many as “Frog”, was an avid outdoors-man and photographer. Some of his favorite activities included hunting, fishing and gardening. He could often be found hauling crab seins, running trout lines or fishing at the plant. A bad day in a blind or on the river was still a good day. Many of his adventures were captured on film with multiple duplicates to share. At any family event, he would be behind the camera with a grin, capturing countless memories. Family was another strong passion of Joe’s. Joe was married from 1973 until 2001. Although the marriage ended, he still considered many of his in-laws family. Many spring days were spent in the garden with his late father-in-law Lawrence. When not at his own home, he could be found at his daughter’s house, where many laughs and stories were shared on the porch over crabs, his pack of Redman on the table. His dedication and presence in the lives of his children and grandchildren were too great for words. His love of children was infinite and he was the adopted “Pop” or “Pop Joe” to many. Joe spent his entire life demonstrating hard work and dedication to not just his family but to anyone he could. He was known for his generosity and willingness to help others. These traits he passes on to his children and grandchildren. He leaves behind to cherish his memory his daughter Holly Buckler of Mechanicsville, MD, grandchildren Brittany Buckler-Hoffmaster and Jacob Hoffmaster of Aylett, VA, Corey J. Buckler, James “JD” Buckler and Ryan Buckler-Long of Mechanicsville, MD. He is survived by his sisters Virginia “Ginny” Cameron of Huntingtown, MD, Earline Santino of West Chesterfield, NH, Theresa Smoot of Souix Falls, SD, brother David Buckler of Aquasco, MD, sisters-in-law Melody Lacey of Charlotte Hall, MD, Jill Potts of Chaptico MD and Anita Gail Lacey of Mechanicsville, MD. He is preceded in death by his parents Earl Thomas Buckler and June Keech Buckler, son Joseph “Joey” William Buckler, Jr., sister Margaret “T.P.” Tincher mother and father-in-law Lawrence and Margret Lacey, and brother-in-law Glenn Lacey Sr. He is also preceded by Mary Agnes “Nanny” Williams, who held a special place in his heart. Family will receive friends for visitation on Thursday, May 21, 2020 from 10:00 am to 11:00 am at Brinsfield Funeral Home & Crematory, P.A., 30195 Three Notch Road, Charlotte Hall, MD 20622. The funeral service and internment will be private.

Joseph William Buckler, Sr. of Mechanicsville, MD passed away unexpectedly at his home on May 7, 2020. Joe was born on December 20, 1949 in LaPlata MD, to the late Earl Thomas Buckler and the late June Lorraine Keech Buckler. He was raised on... View Obituary & Service Information

The family of Joseph William Buckler Sr created this Life Tributes page to make it easy to share your memories.

Send flowers to the Buckler family.