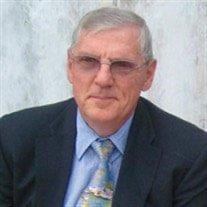 Lawrence Peed, a resident of St. Charles, MD for 51 years, passed away on Nov. 3rd, 2020 at the age of 75. He is preceded in death by his wife, Ruth Ellyn Peed, and is survived by his daughter, Marsha Magnet, son-in-law, David Magnet, grandchildren, Andrew and Abbey Magnet, and brother-in-law, Peter Garrett. Lawrence Randall Peed (Larry) was born on March 13th, 1945 at Providence Hospital in Washington, DC to Ervie Peed and Olga Payne. He grew up in Washington, DC and graduated from Ballou High School in 1963. Larry went on to trade school to become a licensed Operating Engineer. He met his wife Ellyn, in 1968 while she worked as a secretary in the building he helped manage on North Capitol Street. He always claimed that she left the window open in her office on purpose during the winter so that he would have to go and close it for her. They married about 6 months later in March, 1969 and moved south of Washington, DC to a quiet, new suburb in Waldorf, MD. Their only daughter, Marsha, was born a couple of years later. Larry worked for most of his career as an Operating Engineer before becoming a building manager for Schindler Elevators until retirement in 2011. He was always keeping busy learning new hobbies and volunteering with his church. Every now and then, he would leave in the middle of the night to fix something at work or help out a friend. After retirement, he began to spend much of his time outside where he planted and cared for over 80 rose bushes. People would walk by the house just to admire his beautiful rose garden. He loved working with his hands and would create various wood pieces to decorate the house and yard. One day, he fixed up an old bicycle, started cycling, and joined the Oxon Hill Bike Club where he actively participated in various rides all over the county. He and Ellyn enjoyed spending time with his family, his church friends, his neighbors, his bicycling friends, and his dogs and grand-dogs. In Dec. 2017, his world took a turn for the worst when his loving wife, Ellyn was diagnosed with brain cancer. Larry was her constant companion and devoted caregiver until she passed away 6 months later. After this tragic loss, he became active again and could be found cycling the Indian Head Rail trail or local roads several days a week. He would bike for hours and travel many miles. He enjoyed spending time with his grandchildren and even took a trip with his family overseas to the UK and Ireland in 2019. In July 2020, his world was rocked again when he was diagnosed with non-Hodgkins Lymphoma. He was a fighter who stayed strong even through the worst times. He had been doing very well with his treatments until he encountered a blood infection that he just couldn’t overcome. Larry fought hard and stayed strong until the very last day. He would do anything to help his family, friends and neighbors. He loved animals, food, watching Blue Crabs baseball games, as well as washing and fixing up bikes and cars, which he kept spotless. Larry never knew a stranger and his smile was infectious. He spread joy and laughter to everybody around him. He had a big heart, and was an amazing husband, dad, brother-in law, grandfather, friend, and neighbor. There are not enough words to describe how much Larry will be missed by family, friends, and neighbors who loved him dearly. A graveside service will be held at the Garden of Faith section at Trinity Memorial Gardens, in Waldorf, MD on Monday, November 9, 2020 at 2:00 pm. A livestream of the Graveside service will be available on the Facebook page of First Baptist Church of Waldorf.

Lawrence Peed, a resident of St. Charles, MD for 51 years, passed away on Nov. 3rd, 2020 at the age of 75. He is preceded in death by his wife, Ruth Ellyn Peed, and is survived by his daughter, Marsha Magnet, son-in-law, David Magnet, grandchildren,... View Obituary & Service Information

The family of Lawrence Randall Peed created this Life Tributes page to make it easy to share your memories.

Send flowers to the Peed family.