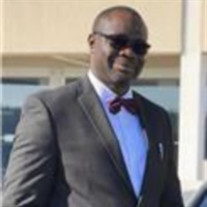 Marrion O. Ainerua was born on the morning of Thursday, February 24, 1977, at the University College Teaching Hospital, Ibadan, Nigeria to Pastor Martins and Patience Ainerua. He started kindergarten at Aikhoje Elementary school and later attended Ibadan Polytechnic Primary School, Nigeria. He attended Abadina College Secondary School then Ambrose Ali University in Ekpoma, Nigeria where he obtained an associate degree in Mathematics, and then a B.Sc in Accounting. Marrion was known to imitate preachers from age 6, holding and using a handkerchief as some preachers do. He was said to have been a very peaceful child who attracted his peers. His mother would ask why people are gathered around him, he will always say "I did not call them". He liked to preach to the children in the neighborhood. During elementary school, Marrion got a lot of compliments from his peers and teachers which raised a curiosity in his teacher to meet his mother for his good behavior. Marrion's was raised in a godly home that believed in the fundamental bible discipline. Marrion was called to the ministry while in college where he touched a lot of lives and drew souls to the Lord. He met the love of his life, Peace, while visiting from college. They became friends and lost contact when Peace relocated to the United States in 2000. Marrion was able to reconnect with her through her brother's email. They were reunited again when Peace visited Nigeria in 2002. They continued to be in touch and they later married in January 2004. He joined his wife in the United States in April 2004, and they lived in Harrisonburg, VA. They later moved to Maryland where he changed career. He worked at ECS Engineering and Geo Technical Company as a field technician and later moved up the ranks through other companies to include Phoenix, KCI and then Kunmi Construction Management Company as a Project Manager. He is known by all to be very hard working, and got the Job done. Marrion attended International Christian Believers Fellowship "ICBF", where he ministered for over 12 years. During his time at ICBF, he travelled to various corners of the world including United Kingdom, Guyana, Trinidad and Tobago, Jamaica, Nigeria, Congo, South Africa, Canada, Lesotho, Kenya and almost every state in the United States to spread the gospel. In December 2016, He was led to start a church called Christian fellowship Tabernacle "CFT". He served as the Pastor of CFT until he was called to glory on Monday, May 11th, 2020 in the company of his family. Marrion loved life and believed in living it to the fullest. He is survived by his wife, Peace; his children, Daniel (14), Rebekah (12) and David (8); his parents, Pastor Martins and Mrs. Patience Ainerua; brothers-in-law, Mr.Seun Obadare and Mr.Kingsley Okoli; sisters-in-law, Mrs.Confidence Obadare and Mrs.Funmi Okoli; nephews, Paul Obadare, Kingsley Okoli, Jr. and David Okoli; nieces, Esther Obadare, Abigail Obadare, Rachel Okoli and Elizabeth Okoli. He is also survived by numerous uncles, aunties, cousins and, friends and a host of relatives, friends, ministers and church family. He will be sorely missed by all whom he has touched their lives. As Christians, we are comforted in the assurance that we will meet again never to part.

The family of Marrion O. Ainerua created this Life Tributes page to make it easy to share your memories.

Marrion O. Ainerua was born on the morning of Thursday, February...

Send flowers to the Ainerua family.