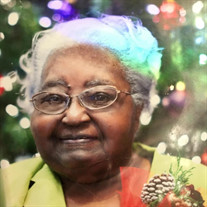 Martha Thomas, also fondly known as “Dumplin,” celebrated October 5, 1926, as her birthday. Census data and witnesses actually document that she was likely born in 1925. She departed this life on July 5, 2020. She was born to the late Mr. Willie and Mrs. Daisy Chew, who is believed to have had sixteen children. Martha attended public school in Calvert County, Maryland. She grew up in Parkers Creek and later moved with her parents to their small farm on Wilson Road. After some time working at home on the farm, she worked in homes as a domestic in Washington, D.C. Later she worked at the Calvert Memorial Hospital as a Nursing Assistant in the newborn nursery for about 26 years. She was fondly called “the baby lady,” as it is estimated she cared for 1,281 babies during her career. She had a special rocking chair made just for her to rock the babies peacefully. When Martha had to take leave due to surgery, her daughter, Darlene, stepped in to fill her shoes. One doctor quickly stated, “no one can take Martha’s place.” All who knew her witnessed her special tender way with “her” babies. At home, Martha raised five children whom she loved with all her heart. She later married Clarence Thomas, Jr. in 1956. She kept her family together and worked many long hours to provide for them. She never complained about all she had to do. She always had a kind word to share and never raised her voice. She taught her children to take pride in their belongings and home. When her children were young, she would tell them she ate dinner at work to ensure they had enough to eat. At times she worked away from home and left them in the care of her dear mother Daisy. Martha would always send money and beautiful clothes home for her children. When times were tough, they still remember that each Christmas she would provide each with a bag of fruit and candy. Each Easter, they would each receive an Easter basket with chocolate and peeps. As adults, she was always there to provide guidance and support. She was excellent at quilting, canning fruits, and cooking delicious meals. She loved to host family dinners during the holidays. I can see her now cooking with her sister Daisy Marie and her daughters. Even still, her sons were the twinkle in her eye. Her children will also remember her love of sweet potatoes, raisin dumplings, her checkerboard, coconut, and chocolate cakes, shopping for nice clothes, and her kind heart. She also loved her vegetable garden and collected owl adornments. Martha loved the Lord. She first attended the Bible Way Church. Later she was baptized into the Emmanuel Seventh-Day Adventist Church on Dares Beach Road before making the Prince Frederick Seventh-Day Adventist Church her home. She served in community service at Emmanuel. Martha was the last of her siblings. She leaves to mourn, her sons, James Gantt and Norval Jacks, Jr., her daughters, Mary Jane Hogan and Darlene Brown, her six grandchildren, Derrick Gantt, Chris Brown (Valta), Carlos Gantt, Sr., Deborah Jacks-Pearson (John), Steven Brown, and Amanda Stewart (Alvin), 12 great-grandchildren, 7 greatgreat-grandchildren, and a host of nieces, nephews, cousins, and friends. Preceded in death are her daughter, Betty Ann Carter, and siblings: Andrew Bernard Chew, Guy Edward Chew, Willie (Bubba) Chew, Jr., Flossie Sanders, Joseph Chew, Betty Jane Mackall, Donald Ralph Chew, Sr., Daisy Marie Chew, and Clifton Rochester Chew, Sr.

Martha Thomas, also fondly known as &#8220;Dumplin,&#8221; celebrated October 5, 1926, as her birthday. Census data and witnesses actually document that she was likely born in 1925. She departed this life on July 5, 2020. She was born to the... View Obituary & Service Information

The family of Martha Thomas created this Life Tributes page to make it easy to share your memories.

Send flowers to the Thomas family.