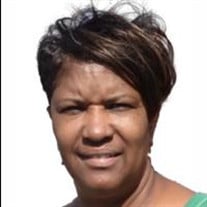 NORA ELIZABETH YOUNG age 65 is survived by her loving family. In compliance with the Charles County Order, all residents and visitors over the age of five (5) will be required to wear masks in all indoor public venues and businesses in Charles County, even if they are fully vaccinated. SERVICES ARE SUBJECT TO CHANGE PER COVID-19 RESTRICTIONS Nora Elizabeth Young was born on September 20, 1955, in Issue, Maryland to the late Harrison King and Rose Cannady. She departed this life on August 19, 2021, after her courageous battle with breast cancer. Nora is preceded in death by not only her father Harrison King but also her sister Mary Hill and her brother Diron Cannady. Nora attended LaPlata high school where she was not only a bright student but also a cheerleader. She graduated in 1974 and soon after began working at Charles Regional Hospital also known as LaPlata Hospital. She excelled quickly as a surgical technician, assisting doctors in surgery for over 43 years. She also worked at Walter Reed Hospital and Clinton Surgical Center. She formed lasting relationships with the doctors who would jump at the chance to have Nora assist them during surgery. After a fulfilling career in the medical field, Nora retired in 2017 and moved to Richmond, Virginia where she lived with her daughter Luvonia, son-in law Mike, and her two grandsons Devin and Jaylen. Nora instilled her hardworking and loving traits to them all. Her support did not only stop at her children but also to be there for her grandkids as well. She was happy to attend every basketball game, track meet, dance recital, baseball game and any other events. She would be the loudest and most excited for anything her kids or grandkids were involved in. Nora loved bingo (sometimes funded by her devoted friend and financier Lowell Brawner), and that's where you could find her most Friday and Saturday evenings with her favorite bingo partner and eldest daughter Sabrina. Sometimes even on Sunday’s. Her true joy and passions were spending time with her family and usually that included playing board games, going out to eat, or her preferred pass time, playing cards until the wee hours of the morning. If she wasn't playing cards at family gatherings, she was in a fierce one-on-one battle in a game of spades with her youngest daughter Danielle. She also loved to cook Thanksgiving and Christmas meals every year and those who had the chance to experience her cabbage and sweet potatoes should consider themselves lucky. She also loved the time every year being spent at family vacations where there was always joy, laughter, and of course card games somewhere along the line. Nora leaves fond loving memories in the hearts of her mother Rose Cannady. three daughters: Sabrina Lee (Tony Wells), Luvonia Lee (Michael Cooper Jr.), and Danielle Brawner. four grandchildren: Davon Thomas, Jada Thomas, Devin Cooper, and Jaylen Cooper, Siblings: John Cannady (Cecilia), Desaree Thomas (Frank), Kevin Cannady (Verdess), Gloria Ward (Carl), Stephanie Cannady, Roderick Cannady,Harold King (Patsy), Michael King (Shirley), D’Borah Hart (James), Daryl King (Donna), Janice King, and Michelle Washington (George). She also leaves a host of nieces, nephews, and other relatives and friends. LIVESTREAM UNDER LIGHTHOUSE BAPTIST CHURCH, WALDORF, MARYLAND

NORA ELIZABETH YOUNG age 65 is survived by her loving family. In compliance with the Charles County Order, all residents and visitors over the age of five (5) will be required to wear masks in all indoor public venues and businesses in Charles... View Obituary & Service Information

The family of Nora Elizabeth Young created this Life Tributes page to make it easy to share your memories.

NORA ELIZABETH YOUNG age 65 is survived by her loving family.