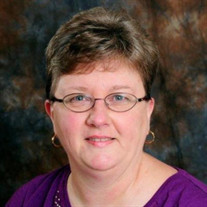 Pamela Suzanne Starkey, 62, of Edgewater, MD (formerly of La Plata, MD) passed away on November 13, 2020 at the Hospice of the Chesapeake Mandrin Inpatient Care Center in Harwood, MD after a long, courageous battle with cancer. Pam was born on November 29, 1957 in Frederick, MD to the late Jesse Lee Starkey and Shirley Mae (Leese) Starkey. Her family moved to Calvert County, Maryland in 1958 where they lived for seven years until moving to Charles County. She graduated from Thomas Stone High School in Waldorf, MD in 1975. She went on to receive her associate’s degree from Charles County Community College and her bachelor’s degree from University of Maryland University College. Before retiring in June 2020, Pam had been with the College of Southern Maryland for almost 30 years serving as an administrative assistant, office manager, benefits coordinator and human resource generalist. In November 1998, as an employee of CSM and as a cancer survivor herself, Pam co-founded the cancer support group Cancer Survivors and Friends (CSF). The initial goal of the group was to provide a support program to residents of the Southern Maryland area who were also cancer survivors themselves. As the group's needs changed, they eventually decided to adapt their goal and focus on raising funds for the American Cancer Society's Relay for Life in Charles County. The group has participated in the Relay for Life as the CCCC/CSM Hawks since 1999. In 2012, CSF decided to further their fundraising efforts and establish the Cancer Survivors and Friends Scholarship to directly benefit CSM students who are cancer survivors or whose lives have been affected by cancer. Through the generosity of CSM employees and friends, the group has raised more than $150,000 for the American Cancer Society and the Cancer Survivors and Friends Scholarship at CSM. Pam was extremely proud of this extraordinary accomplishment. Pam was a beloved mother, grandmother, aunt and friend. Her greatest pleasure came from spending time with family and friends, all of whom will miss her dearly. Pam is survived by her daughters, Jennifer Marth (Eric) and Chelsea Clute (Seth); brothers, Gregory Starkey (Ann) and Joseph Donald Mister (Marta); sisters, Anita Scherer, Janice Earnshaw (R.J.) and Marianne Fernandez; grandchildren, Colin, Aubrey and Austin Marth; and numerous nieces, nephews and other family members. She is preceded in death by her parents; her brother, Stephen C. Starkey; and her stepmother, Mary Ellen (Gardiner) Starkey. Family will receive friends for Pam’s Celebration of Life on Sunday, November 29, 2020 from 5:00 p.m. to 7:00 p.m., with a funeral service at 7:00 p.m. at La Plata United Methodist Church, 3 Port Tobacco Road, La Plata, MD. The family requests that purple be worn to the celebration (in lieu of black) in remembrance of Pam’s favorite color. Interment in Trinity Memorial Gardens, Waldorf, MD will be private. In lieu of flowers, memorial contributions may be made to the Cancer Survivors and Friends Scholarship in memory of Pam Starkey at the College of Southern Maryland c/o CSM Foundation, P.O. Box 910, La Plata, MD 20646 or online at https://www.givecampus.com/aq64r7. Live stream at http://www.facebook.com/laplata.umc

Pamela Suzanne Starkey, 62, of Edgewater, MD (formerly of La Plata, MD) passed away on November 13, 2020 at the Hospice of the Chesapeake Mandrin Inpatient Care Center in Harwood, MD after a long, courageous battle with cancer. Pam was born... View Obituary & Service Information

The family of Pamela Suzanne Starkey created this Life Tributes page to make it easy to share your memories.

Send flowers to the Starkey family.