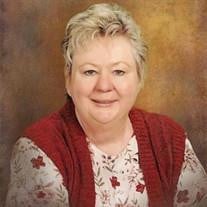 Patricia Margaret Disney, 76 of Waldorf, Maryland, died April 30, 2019. Patricia (Pat) and her husband Cliff (Buddy) recently celebrated their 56th wedding anniversary on April 27th of this year. When people would ask her how they managed to stay together so long, Pat’s response was simply “We are still friends". For many years, Patricia was a homemaker and stay-at-home mother of four. After her youngest son went off to college, Patricia returned to college and earned a degree in paralegal studies, graduated with a 4.0 average, and went to work for a law firm in Southern Maryland. After working in the legal profession for several years, she began working as a substitute teacher in the Charles County school system. She soon realized that her true passion was working with young children. In 2002, she accepted a position as a Para-educator at Dr Mudd Elementary School in Waldorf, Maryland where she worked until retiring in early 2009. She put her heart into working with special needs children, and felt great joy in seeing them respond and in knowing that she was a positive influence in their development. Patricia was always the planner and the organizer of the family. She loved planning and preparing almost as much as the actual experience of the event – she always tried to make it perfect. She loved vacationing with family and friends at various beaches in VA, NC, and SC in the summer and enjoyed train rides and trips to the mountains in the fall when the leaves were starting to turn. In 2002, after a year of planning, she took her entire family to Disney World – it was one of her fondest memories. After retiring, Patricia and her husband, and their little white dog “Dart,” spent the winter months Snow Birding in Florida beginning in 2009 through 2016. In Florida, she enjoyed taking short day-trips and playing cards and other games with friends and relatives. Pat especially enjoyed watching the evening sunset over the water as it slowly disappeared below the distant horizon. While in Florida, she became a member of the Red Hat Society and spent several days designing and creating her beautiful red hat. In recent years, Pat loved just spending quiet time at “The Lake House” – her little vacation home located on a quiet lake in Westmoreland County, VA. She enjoyed sitting on the deck talking with her husband and watching the ducks swimming in the lake. One of her favorite past-times was to cheer for her children and then her grandchildren as they participated in different activities including majorettes and drum corps, football, baseball, softball, skating, cheerleading, and dance. She was always their number one fan. She enjoyed sewing and was a member of a local sewing club and a member of the Quilters Guild of Southern Maryland. She also enjoyed doing crafts and painting. She made several lifelong friendships with some members of these clubs. She was the daughter of William Henry Maddox and Margaret Mary Sweeney Maddox. In addition to her parents, she was also predeceased by her brother, William Joseph Maddox. She is survived by her husband, “Buddy” Clifton Disney; her sons, Clifton W. Disney III and William Joseph Disney; her daughters, Melanie Lynn Cannon and Joanna Marie McLane; her son-in-law, Robert Cannon; her brother, Edward Maddox; her grandchildren, Robert Leigh Cannon, Jr., Margaret Mary Cannon, Catherine Marie McLane, and Allison Marie McLane; and her great-grandchildren, Lillian Grace Finch, Aiden Leigh Cannon, and soon to be Carter Cash Finch. Visitation on Tuesday, May 7, 2019 from 5-8PM with Wake Service at 7PM at Raymond Funeral Service Chapel, 5635 Washington Avenue, La Plata, Maryland 20646. Mass of Christian Burial on Wednesday, May 8, 2019 at 10:30AM at St. Peter’s Catholic Church, 3320 St. Peter’s Drive, Waldorf, Maryland 20601. Interment to follow at Trinity Memorial Gardens. Memorial contributions in Patricia’s name are asked to St. Jude Children’s Research Hospital, Memorial and Honor Program, 501 St. Jude Place, Memphis, TN 38105-1942.

Patricia Margaret Disney, 76 of Waldorf, Maryland, died April 30, 2019. Patricia (Pat) and her husband Cliff (Buddy) recently celebrated their 56th wedding anniversary on April 27th of this year. When people would ask her how they managed to... View Obituary & Service Information

The family of Patricia Margaret Disney created this Life Tributes page to make it easy to share your memories.

Send flowers to the Disney family.