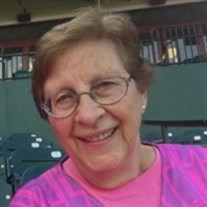 Penelope Suzanne Young, 78, passed away on Tuesday, February 8, 2022 at her home. Born on August 21, 1943, in Indianapolis, Indiana, she was the eldest daughter of the late Frank Davis and Mary W. Davis. She relocated to Denver, Colorado with her family. While working for May Department Stores there, Penny met the love of her life Stephen Young, to whom she later married in Arvada, Colorado in 1968. She moved to Washington, DC in 1967 and worked in the U.S Senate working in the office of Senator Gordon Allott of Colorado. In 1969, with the birth of her first child, Penny began doing what she loved most; raising her three children; Jennifer, Andrew, and Benjamin. As the children grew older, Penny also found a second career in Real Estate that matched her love of helping people find new homes. Penny was a Wife, Mother, and Real Estate Agent for many years. She was a long-standing member of Good Shepherd United Methodist Church in Waldorf beginning in the early 70’s and shared many happy family memories surrounded by its fellowship. In later years, Penny and her husband spent their time traveling with friends and vacationing; often those travels included special moments with grandkids as she continued support to her children. Penny and Steve also spent a great deal of the past decade sitting behind home plate at the Southern Maryland Blue Crabs Baseball stadium rooting for the home team, cheering on one of the players who were staying with them from time to time, or simply holding each other’s hands as they enjoyed the sunshine. Penny was preceded in death by her parents, Frank and Mary Davis, her brothers Tom and Jerry Davis, as well as her dear grandson Mason Young. Penny’s story and legacy are continued by her husband Stephen Young, the children, Jennifer Lowe (Joe), Andrew Young (Sheri), Benjamin Young (Melissa); grandchildren, Jessica Carver (Travis), Joe Lowe (Dee), Seth Lowe, Jackson Young, Justin Ruiz, Davis Young, Wyatt Young, and Lillie Young; great granddaughter Jordan Carver; and sister Merdi Privott (Terry). Services will be held on Monday, March 7, 2022 at 11 AM at Good Shepherd United Methodist Church, 305 Smallwood Drive, Waldorf, MD 20602. A private burial will follow the service at Trinity Memorial Gardens. Memorial contributions may be made to Susan G. Komen at www.komen.org.

Penelope Suzanne Young, 78, passed away on Tuesday, February 8, 2022 at her home. Born on August 21, 1943, in Indianapolis, Indiana, she was the eldest daughter of the late Frank Davis and Mary W. Davis. She relocated to Denver, Colorado with... View Obituary & Service Information

The family of Penelope Suzanne Young created this Life Tributes page to make it easy to share your memories.