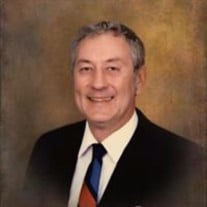 On March 6, 2022, Raymond Stublarec, 84, of Benedict, Maryland was called home to our Lord. Beloved husband of Rose Stublarec, father of Karen Carroll (David), Kimberly Budash (Tim), Melanie Hooper (Gary) and Pappy to David Carroll (Darryl), Ben Carroll (Justina), Sarah Westover (Seth), Zachary Hooper, Elizabeth Hooper and great-grandfather to Brett, Allison, William and Sawyer and beloved brother-in-law Francis Tippett. He was also a uncle to his many nieces and nephews. Born on March 24, 1937 to the late Joseph and Helen Stublarec (nee Lugar) in Johnstown, Pennsylvania, brother of the late Bernadette and Rich. Ray was a veteran of the Naval Reserves, retired Ironworker, and past president of Rodman Local 201 and retired member of Ironworkers Local 5. Ray enjoyed fishing, eating hard crabs, watching NASCAR races and was an avid football fan. He also enjoyed many hours putting together jigsaw puzzles and often enjoyed his water views of the Patuxent River. He enjoyed playing cards and the new family "tradition" of playing birthday bingo in which he was a fierce competitor! And as you know, he was a "pistol"! But most of all Ray loved his family. He will be truly missed and will be forever in our hearts. May he rest in peace. Ray was of the Roman Catholic faith and a member of St. Francis de Sales Catholic Church in Benedict, Maryland. Memorial contributions can be made to St. Francis de Sales Catholic Church in Benedict, Maryland. Services will be held at St. Francis de Sales Catholic Church in Benedict, MD Tuesday, March 15th with visitation from 10:00 am to 11:00 am. Mass will be held at 11:00 am and interment will be private.

The family of Raymond Mark Stublarec created this Life Tributes page to make it easy to share your memories.

Send flowers to the Stublarec family.