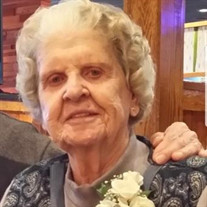 Rosemary Gregory Arbogast was born in Cleveland West Virginia, daughter of Rhoda Agnes (Berry) Gregory and Freeman Otis Gregory on November 19, 1930. She had a younger brother (Harold 'Buster' Gregory) and sister (Linda Gregory Johnson) and cousins (Louise Bottomley and Betty Jean Fuller). They all shared and grew up in the same house. Rosemary met her husband Dale Arbogast of Hacker Valley, West Virginia at the age of 12. Although older, he knew she was the one. After Dale served during WWII, they married when Rosemary was 17. They remained sweethearts throughout a loving marriage of 72 years. During their marriage they were blessed with three sons Robert (Bob), Richard (Dick) and Bradford (Brad). As a result of a love for learning and education, the family moved to Maryland in 1956 where they raised their family and became active members in their church and community. Rosemary was the heart of the family and played an active role in supporting her husband, Dale, as he pursued additional education and became a teacher and elementary school principal. After all the sons were in school, Rosemary worked at the Charles County Assessment and Taxation Office, serving her community as the Assessment Office Manager for many years. She also served as the clerk at Marbury Baptist Church for over 50 years. Rosemary and Dale worshiped regularly at Marbury Baptist Church. She enjoyed supporting her family, friends and community. She enjoyed singing in the choir and was an avid bird watcher. Rosemary is survived by her husband, Dale; sons - Bob (Robin), Dick and Brad (Pat); grandchildren - Rob, Rick, Sarah, Philip, Grace; great grandchildren - Elodie, Newton, Michael, Tiffany, Nick, Katie, Chris, Zack, Samuel, as well as nieces Anne and Ellen. She had a wonderful spirit, and spunk. She was a loving and supportive center for the entire family. Her smile and presence will be missed forever. Visitation will be held at Marbury Baptist Church on Tuesday, February 11, 2020 from 4:00 - 7:00 PM and Wednesday, February 12, 2020 from 11:00 AM until time of funeral service at 12 noon. Interment Trinity Memorial Gardens, Waldorf, MD 2:30 p.m. Repast will follow at Marbury Baptist Church. In lieu of flowers, donations can be made to: Marbury Baptist Church, Alzheimer's Association, or Charles County Hospice.

The family of Rosemary Gregory Arbogast created this Life Tributes page to make it easy to share your memories.

Send flowers to the Arbogast family.