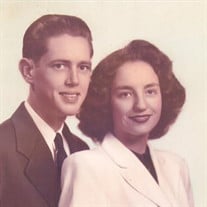 After a long and meaningful life, Ruby Fern (Altizer) Lavinder, 89, of Brandywine Maryland, left us on the morning of April 12, 2021. She was born to humble beginnings on May 30, 1931, in Houchins, Virginia. She was the daughter of Charles B. and Sarah (Simpkins) Altizer. Her father worked on the railroad in Cambria, Virginia and her mother tended the home where one of her many talents was making natural remedies that she later sold to drug companies, where she managed the family farm in rural Cambria (now part of Christiansburg), and ran the local Post Office from her living room. As a teenager, Ruby and her sisters performed on the old radio shows in the South where she sang and played guitar. Ruby married the love of her life, John Clifford Lavinder, on June 17, 1947 and they moved to Maryland to begin their lives together. They remained married for 69 years until his death in April, 2006. She cherished the memory of her beloved husband, her mother and father, and all 12 siblings. She never stopped missing her mother who left this world in 1965. Ruby loved to recount stories of her upbringing on their small, self-sufficient family farm where she spent countless hours playing with her brothers and sisters in the swimming hole, walking together for miles to and from the school house, and reading the Sunday funny papers under the big oak tree. She was devoted to her children. Her love of family was strong as evidenced by decades of family gatherings and by the care she put into the countless meals she lovingly prepared for them. She loved to embroider, making many lovely items she gave as gifts and she loved music from her southern roots. Throughout her life she held many jobs. Her first job as a young teen was at the Overall Factory in Radford, Virginia. In Maryland she worked as a waitress at Junior Hot Shops in LaPlata, at a printing company in Suitland, as a waitress and cook at Vince’s Restaurant in Clinton, and as a secretary at Tri Plumbing Supply in Capital Heights. She retired in 1989. In addition to her husband, Ruby lost her son, Charles Irving Lavinder, in October 2020; her brothers Roy, Shirley, Guy Shelor, Bentley, and Charles Sherman Altizer; sisters Vernice Lucas, Lola Tourigny, Norma Jean Wells, Nora Jones, Mellie Williams, Mary Lou and Mabel Altizer. The family is now all together in heaven. She will be missed by her children Mary Lavinder, Linda Lavinder Tavares and husband Todd; daughter in-law Karen Lavinder; grandchildren Jason Lavinder and husband Kenneth, Christopher Hume and wife Christie, Chelsea Miller and partner Cory; Justin Tavares, and Jonathan Tavares; 5 great grandchildren; brother in-law Jimmy Wells; cousin Frank Sarver and wife Dorothy; special neighbors Mary (Janelle) Skinnard and Janie Gullickson who took such loving care of her later in life; very loving long-time friend Thelma Richards. The Lord whispered in her ear "You are home now" as He carried her away in His arms. A private family service will be held at Trinity Memorial Cemetery on Friday, April 16th at 12:00 pm. Donations may be made in her honor to the Charles County Animal Shelter in Waldorf, Maryland. "The Lord bless you and keep you; The Lord make His face shine upon you and be gracious to you; The Lord lift up His countenance upon you and give you peace." —Numbers 6:24–26.

After a long and meaningful life, Ruby Fern (Altizer) Lavinder, 89, of Brandywine Maryland, left us on the morning of April 12, 2021. She was born to humble beginnings on May 30, 1931, in Houchins, Virginia. She was the daughter of Charles B.... View Obituary & Service Information

The family of Mrs. Ruby F. Lavinder created this Life Tributes page to make it easy to share your memories.

After a long and meaningful life, Ruby Fern (Altizer) Lavinder,...

Send flowers to the Lavinder family.