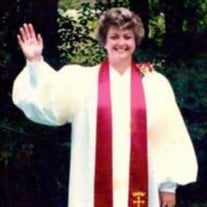 N LOVING MEMORY OF REVEREND SHIRLEY A. WILKERSON Shirley Ann Wilkerson was born into this world on January 29, 1943, in the town of Leonardtown, Maryland to the late Wilmer Vernon and Eva Mabel Higgs (Wathen, Hill). She made her beautiful transition to glory on August 19, 2021, peacefully at her home. The last words she heard in this earthly realm were from one of her favorite passages of the bible, Song of Solomon 6:8 “Who is coming up from the wilderness leaning on her beloved? Beneath the apple tree I awaken you. There your mother was in labor and gave you birth. Put me like a seal over your heart, like a seal on your arm. Love is as strong as death.” Shirley was a lifelong resident of St. Mary’s County. In her early years she was a waitress and licensed beautician and she raised a large family of 9 children. She felt God’s call on her life in the late 1970’s and became one of the first ordained female ministers in Southern Maryland. She established her first home based church Cornerstone Ministries which quickly grew as many people were being touched and transformed by her teaching. She later established her second ministry Master’s Touch located in Waldorf, Maryland. The hallmark of her ministry was to show the power of God’s love over all else. Her particular favorite lessons revolved around the Song of Solomon and The Tabernacle Teachings. She was a mighty prayer warrior and forever bold, steadfast and true to an unshakable faith to the very end of her days. She had a great love of the water, growing beautiful flowers in her yard, being an avid reader and collecting many spiritual books, beautiful clothes and shoes. Most of all she loved being surrounded by her children, grandchildren and great grandchildren who she called her trophies. She had deep and abiding close relationships with both of her sisters, Jean Bartelmes (Jerry) and Janet Nagle (John). Shirley is predeceased by her soulmate and loving husband Joseph P. Wilkerson, her son William Ernest Hill, her daughter Sheila Wilkerson Beadle and her grandson Michael A. Bennett. She leaves to cherish her memory Joseph P. Wilkerson, Jr. (Donna), William G. Wilkerson (Joyce), Barbara A. Wilkerson Bennett, Dorinda L. Hyde (Tony), Melissa G. Wilkerson, Corey S. Wilkerson, Jaime L. Wilkerson (Sharon) and William G. Beadle, III (Jennifer). Shirley had 17 Grandchildren and 17 Great Grandchildren. She also leaves untold numbers of people whom she loved like a spiritual mother having brought to them the knowledge of the saving grace of God throughout her many years of ministry. It was her wish to leave a legacy from 1 Corinthians 13:13 “Until then, there are three things that remain: faith, hope, and love—yet love surpasses them all. So above all else, let love be the beautiful prize for which you run.” The family will receive friends on Saturday, August 28, 2021 from 10:00 a.m. to 11:00 a.m. at Brinsfield Funeral Home & Crematory, P.A., 30195 Three Notch Road, Charlotte Hall, MD 20622. A Funeral Service will be held at 11:00 a.m. at Brinsfield Funeral Home and officiated by Pastor George Jarboe and Pastor Joseph Wible. Interment will follow immediately in Trinity Memorial Gardens, 3221 Mattawoman Beantown Road, Waldorf, MD 20601. All are invited to share in a time of fellowship with the family after the interment at The River Church in Hughesville, Maryland. Condolences to the family may be made at www.brinsfieldfuneral.com All arrangements have been made at Brinsfield Funeral Home & Crematory, P.A.

N LOVING MEMORY OF REVEREND SHIRLEY A. WILKERSON Shirley Ann Wilkerson was born into this world on January 29, 1943, in the town of Leonardtown, Maryland to the late Wilmer Vernon and Eva Mabel Higgs (Wathen, Hill). She made her beautiful transition... View Obituary & Service Information

The family of Reverend Shirley Ann Wilkerson created this Life Tributes page to make it easy to share your memories.

Send flowers to the Wilkerson family.