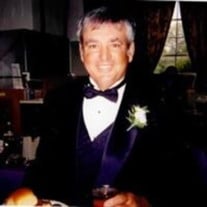 Sidney Jerome “Jerry” Turner, 79, of Mechanicsville, MD, died on Friday, October 2, 2020 at Chesapeake Shores Rehab and Nursing Home in Great Mills, MD due to complications of diabetes/stroke. Born on December 21, 1940 in the village of Ryceville near Mechanicsville, he was the son of the late Eunice A. and Sydney A. Turner. He is survived by his loving wife of 58 years, Nancy (Bartz) Turner; two sons, David L. Turner (Elizabeth) of Mechanicsville, MD and Steven C. Turner (Alanna) of Mt. Airy, MD; eight grandchildren: Jason and Emily Turner of Mechanicsville, MD and Ashlyn, Jack, Brooke, Vivian, Dexter and Savannah Turner of Mt. Airy, MD. Jerry is also survived by one brother, James A. Turner (Catherine) of Mechanicsville, MD, a special cousin, Charles E. Turner (Judy) of Chatsworth, CA and a number of nieces and nephews. In addition to his parents, he was predeceased by his sister, Mary Helen Tippett, and “like a brother” Dickie Graves, both of Mechanicsville, MD. Jerry graduated from LaPlata High School in 1958 and farmed the Turner family farm, along with his brother, his whole life; growing as much as 35 acres of tobacco at times. He was a part-time waterman in his younger days and groundskeeper at Laurel Springs Park in LaPlata for six years before retiring in 2007. Jerry was a nature lover to a fault, protecting bluebirds, bees and crows and fussed if you stepped on an ant or a spider. He enjoyed old tractors and cars, flea markets, antiquing, local history, telling stories about his childhood, good seafood, the company of family and friends, and his tabby cat, Zoey.

The family of Sidney J Turner created this Life Tributes page to make it easy to share your memories.

Send flowers to the Turner family.