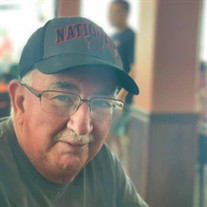 Terry Lee Bradfield of Waldorf, MD (August 29, 1954 - September 23, 2020) was born in Washington DC. He is survived by his beloved wife, Bonnie Lee Bradfield, two daughters, Shannon Marie Bradfield & her long-time partner Louis Baker Jr., & Amanda Lee Bradfield and three grandchildren, KaeLeigh, Louie, & Khloe; his Brother, Kevin Bradfield and his sister Rebecca Montgomery and her daughters, Megan and Melissa, and great-uncle to Brayden & Briana, and to Jordynn, Ravynn, & Brooklyn; and his sister-in-law Anna Keller & her husband Harry Culver, her children Kristen Schofield & her husband Mark Schofield, Ricky Smallwood, and Zachary Schmidt & his wife Emily, and great uncle to Alivia & Brantley. He is proceeded in death by his father Roger Walter Bradfield, his mother Eileen Sheehan, mother-in-law Barbara A. Keller and father-in-law Ted Keller. Terry's occupation was a commercial printer and like everything else in his life, he gave it his all. He mentored and inspired young apprentices. Terry may have been a printer by profession, but he was a jack-of-all trades and handyman, there was nothing that Terry couldn't fix or do. Terry was a family man who loved his wife, children, & grandchildren. He had a life-long group of friends from Hillcrest Heights that mourn his loss as well. They grew up together as kids and the bonds of friendship continues. He was a Washington DC sports fan. Some of his favorite times were the Joe Gibbs era Redskins football Team and the Super Bowl wins, The Capitals winning the Stanley Cup, & most recently the Nationals winning the World Series. However Terry's greatest love was his wife, Bonnie. She was Terry's missing puzzle piece and they fit together perfectly. It has always been, Bonnie & Terry. Terry was a man that always gave a helping hand whenever needed. He was a generous man who will always be remembered with a smile on his face and laughter in his heart.

The family of Terry Lee Bradfield created this Life Tributes page to make it easy to share your memories.

Send flowers to the Bradfield family.