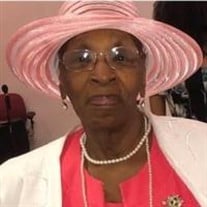 THELMA THERESA LYLES-TAYLOR (AGE 82) OF WHITE PLAINS, MARYLAND On Monday, February 3, 2020 in Clinton, Maryland, Thelma Lyles-Taylor peacefully transitioned to eternal life. Minister Thelma Theresa Lyles Taylor, affectionately known as “Thelma T”, was born on September 15, 1937 to the late Rev. Robert H. and Sarah E. Lyles. She was educated in the Charles County Public School system and graduated from Pomonkey High School. In 1963, she married Ralph Taylor and from that union one son was born. Thelma was an educator buff from the very start. She continued her education pursuit and received her Associates Degree from Morgan State University, her Bachelor’s degree from Bowie State University and her Master’s degree in Education from the prestigious Howard University. Thelma than became an educator with the Charles County Public School system and spent the tenure of her 42 year career as an educator in English at General Smallwood Middle School. Due to her longevity she taught generations of student, who became family to her. Thelma then heard the call of the Lord to ministry. In following her father’s footsteps she answered that call. While working a full time job, being a full time mother and an educator, Thelma went back to school to fulfill the call of the Lord. Thus, she attended Wesley Theological Seminary where she earned her Masters of Divinity degree. She whole heartedly served at Zion Wesley United Methodist Church. She served as a Sunday school teacher, was a member of the United Methodist Woman, sang on the women’s choir and she was a lay speaker. She was very influential in the remodeling and upkeep of the church. Thelma loved her grandchildren and was elated at the accomplishments they made. She loved to listen to Bob Marley and watch Pat Sajack and Vanna White on Wheel of Fortune. She was a feisty, caring, phenomenal woman of faith. Oh yes, and she was fly! Always dressed to the nines. When asked, why are you dressed up sitting in the house? Her reply – “You never know who might come knocking on your door!” She was so witty and quick on her feet. She was charismatic, poised, well spoken, and full of wisdom. Thelma had many witty colloquialisms such as “Hit the road and make dust” and more infamously “If you need to call me, hit me on my hip” (which meant call me on my cell phone). On Monday, February 3, 2020, loving mother, gracious grandmother, noble great grandmother, humble servant, Minister Thelma Theresa Lyles Taylor, transitioned from this life’s journey to Triumph to her heavenly home. Minister Taylor was preceded in death by her husband, Ralph Taylor; her parents, Rev. Robert and Sarah Lyles; two brothers, Robert “Sonny” Lyles and Joseph “Dickie” Lyles; one brother-in-law, Jake Marshall; one sister-in-law, Velma Lyles. Minister Taylor leaves to celebrate and memorialize her life’s legacy, three sons, Jeffery Taylor, John and Earl Woodland; one daughter/niece, Lisa Neal (Marques); one exemplary and dedicated honorary daughter, Terri Branson; four grandchildren, Jamal and Shante’ Taylor and Nakia and Shantay Woodland; one great grandson, Isaiah Taylor; two brothers, Parker (Ann) and Russell (Christine); six sisters, Mary Marshall, Betty Moore (Julius), Essie Duckett, Helen Lyles, Jean Swann (JP), and Annie Lyles; one sister-in-law, Margaret and a host of nieces, nephews, family and friends. Thelma T’s last words of wisdom: I leave you love. I leave you hope. I leave you the challenge of developing confidence in one another. I leave you a thirst for education. I leave you a respect for the use of power. I leave you faith. I leave you racial dignity. I leave you a desire to live harmoniously with your fellow men. I leave you finally, a responsibility to our young people. Her Viewing will be, 10:00 am, until time of Service, 11:00 am, Tuesday, February 11, 2020 at Fort Foote Baptist Church, 8310 Fort Foote Road, Fort Washington, Maryland 20744. Interment, Trinity Memorial Gardens, 3221 Mattawoman Beantown Road, Waldorf, Maryland 20601.

The family of Thelma Theresa Lyles-Taylor created this Life Tributes page to make it easy to share your memories.

Send flowers to the Lyles-Taylor family.