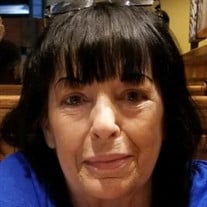 Theresa Jean Brown, 60, of Waldorf, Maryland died on May 23, 2020 at Charles Regional Medical Center in LaPlata, Maryland. Theresa was born on August 26, 1959 at Selfridge Air Force Base in Mount Clemens, Michigan to the late Norman H. Brown and Joanne M. Calligan-Brown. She was the third child of four and was an 'Air Force Brat' so she moved quite a bit until 1971, when the family settled in Waldorf. It was a nice, quiet place on a dead-end street in Carrington (St. Charles). However, our dead end street gave way to more houses, and eventually the addition of a whole new neighborhood. Theresa worked at UM Prince George's Hospital Center in Cheverly, Maryland as a Medical Records Analyst. She loved her job and found a very good friend in Louis Dent, Jr., as well as numerous other very special co-workers. During her school years she made a couple life-long best friends, Darlene Hamilton and Lisa Hodge-Howard, who kept in touch through the years. Their friendship meant a lot to Theresa. Theresa LOVED animals—especially her dogs, Prissy and Boogie, and her cat, Princess. They were her best friends. Theresa also enjoyed playing Facebook games on the computer. Every day, before and after work, she would relax by playing Family Farm. She had many virtual friends that she communicated with on a daily basis. Theresa was preceded in death by her parents, Norman H. Brown and Joanne M. Calligan-Brown, and brother, Norman H. Brown, Jr. She is survived by her sisters, Cathy J. Brown-Yates (Alvin); Barbara A. Brown (James, deceased May 11, 2020); nieces, Crystal L. Alexander and Sarah L. Brown, nephews, James E. Brown (Chrissy), Norman W. Brown (Robin), Christopher J. Brown, and a host of many other relatives and friends.

The family of Theresa Jean Brown created this Life Tributes page to make it easy to share your memories.

Send flowers to the Brown family.