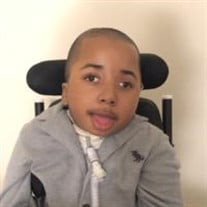 WILLIAM JOHN BLAKE "WILLIE J." age 6 of White Plains, Maryland William John Blake was born to William and Kimberly Blake on May 27, 2014, in Clinton, Maryland at Southern Maryland Hospital. On Wednesday, May 26, 2021, at age 6, he was called home to be with the Lord. William was a born fighter and was his family’s Superman. Willie J, as he was called by his family, loved to watch television with his family, fight with his dad and Uncle Dell, snuggle with his mom, and be anywhere his big Sister was. He loved to hear her read and no matter where she was in a room, he would break his neck until his eyes would find her. Although he battled Sickle Cell, Alexander Disease, and Epilepsy, he got to enjoy everything in life, from going to the amusement parks to being on his school’s basketball team. Willie J attended Berry Elementary for Pre-K and Billingsley Elementary for Kindergarten and 1st grade. His favorite subject was music. His favorite color was red. His favorite show was Sid the Science Kid. He enjoyed getting his monthly haircuts from his Uncle Kenny while giving him a couple of side eyes during the process. Another one of his grooming favorites was to get his nails cut and filed by Grandma and Pop Pop Washington. His favorite song was Three Little Birds by Bob Marley, but it had to be sung by his mom. His favorite restaurant was Hooters, we think it was because of the tater tots. His favorite hobby to do no matter where he went was fake sleeping. If he did not want to do something whether it be at school or at home, he would fake sleep in a heartbeat. The only way we could tell is when he would hear something that he found more interesting, and you would see him peak to see if it was worth looking at. Even though Willie J could not speak he always found a way to communicate. If he were getting annoyed, he would stick his tongue out. If dad or sister got on his nerves, he would let them know with a couple of huffs and puffs followed by a stern sigh. Throughout his life, Willie J always seemed to help others to remember to Live Life, Love Life, and always find a way to Laugh in Life. He is preceded in death by the following grandparents: John Blake (Grandfather), Hattie Green (Great-Grandmother), James Green (Great-Grandfather), Levi Blake (Great-Grandfather), Dorothy Ford (Great-Grandmother), William Collins (Great-Grandfather), George Washington (Great-Grandfather), Ethel Washington (Great-Grandmother). Willie J leaves to cherish his precious memories his parents William and Kimberly Blake, his sister Deanna Blake, Uncle/Godfather Lydell Washington, Aunt Tracy Washington, Aunt/Godmother Valerie Blake, Uncle Steven Blake, Grandparents John and Mary Washington, Grandmother Agnes Witcher, Step-Grandfather Fred Witcher, Great Grandmother Pauline Collins, and a host of Great Aunts, Uncles, cousins, and friends. PRAYER SERVICE TO BEGIN AT 9:30 AM

WILLIAM JOHN BLAKE "WILLIE J." age 6 of White Plains, Maryland William John Blake was born to William and Kimberly Blake on May 27, 2014, in Clinton, Maryland at Southern Maryland Hospital. On Wednesday, May 26, 2021, at age 6, he was called... View Obituary & Service Information

The family of William John Blake created this Life Tributes page to make it easy to share your memories.

Send flowers to the Blake family.