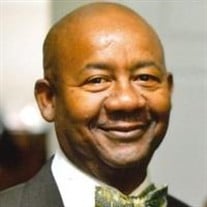 On the day of our Lord, November 1, 2018, God in his infinite wisdom called Willie Lewis Melson, Sr. to eternal rest. Lewis was born in Sharpsburg Georgia on March 8, 1950 to Flenard and Jessie Melson. He was the first born of four children. He was known to his family as Lewis and to his wife and friends as Will. He began his education in Georgia and moved to Washington DC in 1963. He graduated from Phelps Senior High in North East Washington. He was employed at the Library Of Congress for 38 years. There he worked as a duplication service technician. After retirement, his passion for driving inspired him to established his own Limousine Service. He married the Love Of His Life, Porcia Melson, on September 27, 2015. They spent many days doing what they loved, watching sports and traveling. When they first start dating, they were drawn together because of the love of hand dancing and talking about the Redskins. As a born again Christian, Lewis loved the Lord. He would always tell Porcia how much he loved the Lord and his favorite scripture was the 23rd Psalms. At times he would have three TVs going at once with all spiritual channels displayed, such as, Trinity Broadcasting Network (TBN), Day Star and any type of preaching His favorite hobbies were dancing, playing pool, playing Bid Whist at Andrews Air Force Base and watching the Wizards and Redskins. He was a man with many friends that brought joy to his life. He loved watching his son “Little Willie” bowl, share their likes for the Wizards and Redskins and just hanging out together and bragging about his basketball coaching days. He was preceded in death by his son Eric Kirk. He leaves to cherish his memories, his loving wife Porcia, son Willie Jr., mother and father, Flenard and Jessie, brother, David (Robin), sisters, Diane Johnson and Mevelyn Greene and a host of nieces, nephews, great nieces, aunts, uncles, cousins and friends. His viewing will take place from 2:00pm until time of service, 4:00pm, Saturday, November 10, 2018 in the Chapel of Thornton Funeral Home, P.A., 3439 Livingston Road, Indian Head, Maryland 20640. Interment, Monday, November 12, 2018, Trinity Memorial Gardens, 3221 Mattawoman Beantown Road, Waldorf, Maryland 20601.

On the day of our Lord, November 1, 2018, God in his infinite wisdom called Willie Lewis Melson, Sr. to eternal rest. Lewis was born in Sharpsburg Georgia on March 8, 1950 to Flenard and Jessie Melson. He was the first born of four children.... View Obituary & Service Information

The family of Willie Lewis Melson created this Life Tributes page to make it easy to share your memories.

Send flowers to the Melson family.